From the anime Phoenix Wright Trials and Tribulations.

On July 21, 2008 (at 00:16:18 CET), Valoo asked me to transcribe this music. I remarked it had 3 voices, so I answered that it might be impossible. Then I noticed 2 voices could be played at right hand, so I wrote the sheet and recorded it (it’s now my most seen video on YouTube o_O).

On April 18, 2010 (at 00:58:45 CET), I learned that Noriyuki Iwadare would be present at Japan Expo. 7 days later, I found his Facebook page (on the Japan Expo website) so I sent him a message (in Japanese; I spent a long of time writing it —__—) with the YouTube video of “Objection!”. In the evening, I went on my Facebook account and discovered that “Noriyuki Iwadare wants to add you as a friend.” He also sent me a message to tell me that the video was “とてもすばらしい！！” (really beautiful). Then, I met him at Japan Expo :)

I also recorded it on YouTube (my channel name is Xnihpsel, nice to meet you):

Hey, don’t leave that quickly, there is plenty of anime sheet music on this website.

Also, I am the pianist of Trio ELM. We perform anime and game music in concerts. 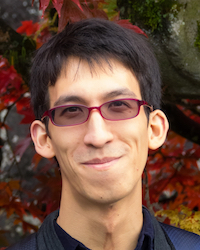